Paul Rees writing for the Guardian

Stuart Lancaster returns on Friday night to an English club ground in an official capacity for the first time since England were knocked out of last year’s World Cup and he lost his job as head coach in what was euphemistically described at the time as a mutual decision.

Now a senior coach with Leinster after taking time out in the new year to study coaching methods in the southern hemisphere, Lancaster will be at Franklin’s Gardens for the European Champions Cup match with Northampton and a reunion with a player he controversially left out of his World Cup squad on disciplinary grounds, England’s current captain, Dylan Hartley, who will be on the bench after his autumn series exertions.

Hartley has a 100% record as captain, with England winning all 14 matches they have played since being knocked out of the World Cup by Australia, 13 under Eddie Jones who, after last weekend’s victory over the Wallabies marked an unbeaten 2016, praised the contribution of his predecessor. 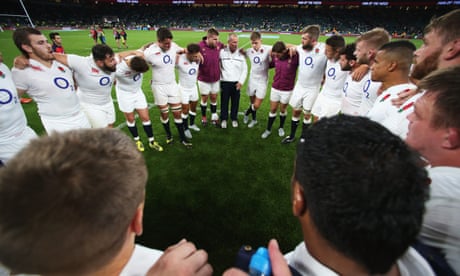 “I am not surprised at England’s success,” said Lancaster in return. “Very few international teams have been on that sort of winning run and it is fantastic. Eddie and his coaches have done a brilliant job in getting the best out of a very experienced team. In the World Cup [when England had the youngest squad in the tournament] we had around 450 caps in the starting side: now it is 600-700.

“I always said the new phase of English rugby would be successful but nothing happens by chance and I think the coaches, Eddie in particular, deserve the credit. I sat down with Eddie not long after I had lost the role of head coach and told him he had a good group of players. He has brought his own personality and style to the team and they have benefited from it.

“You are pleased the hard work has paid off and good luck to them for the Six Nations. I know from working over here how competitive that Six Nations programme is going to be. Being in Ireland now, all roads are leading to the Aviva on St Patrick’s Day [England play there the day after]. It will be some Six Nations, which is great for the competition but also for the Lions.”

Lancaster is not the only member of England’s World Cup management team to be working on the other side of the Irish Sea. Andy Farrell is part of Ireland’s set-up and a year which started with the Pro12 failing to provide a Champions Cup quarter-finalist and Ireland’s defence of their Six Nations title crumbling in the opening three rounds when they failed to win a match, ended with victories over New Zealand and Australia to follow a first away triumph in South Africa and five wins out of seven in the opening two European rounds.

“The failure to make the knockout stage last year is not the main driver for Leinster, but having spoken to coaches from other teams there is a clear sense of disappointment that only teams from England and France went through,” said Lancaster. “The European Cup is a massive motivator for the Pro12 teams and I do not see it becoming an Anglo-French affair again. There is a slight difference in the overall quality of the Pro12 and the Premiership, but across the board at the top end of the Pro12, teams are well equipped for Europe.”

Lancaster’s role with Leinster involves hands-on coaching, in contrast to England where he was more of a director of rugby, overlooking everything, and under him the young centre Garry Ringrose is blooming.

“The one thing I wanted to clarify before committing myself was what the role was,” he said. “A lot of the bigger picture stuff such as selection, recruitment and the relationship with the Irish union is [head coach] Leo Cullen’s.

“For me it is about attack and defence which is a change from my England role. I am really enjoying it, able to just think about training sessions and seeing progress. Leinster have a group of talented players who were coached by Joe Schmidt and Matt O’Connor, so have a good framework in attack. I have tried to add my personality to it.”

Leinster are well placed in the Pro12, second behind Munster on points difference, and travel to Northampton at the top of a group in which every side has won and lost one match as they have secured two bonus points. Three years ago, they played Northampton in successive weekends, winning handsomely away and losing at home.

“I am not reading anything into the previous games against them,” said Lancaster. “I know how good a team they are and it is important we come away from the game with something. They will be lifted by the return of their England players who will be brimming with confidence and we could see the lift last week when our Ireland internationals came back. Garry reminds me of some of the young English centres I was coaching back in 2012, such as Jonathan Joseph, blessed with unbelievable talent and having no fear.

“As a coach you always have to prove yourself and that’s what drives me more than anything else: it was a great move to join a top European club. I don’t miss certain parts of being head coach and we will see about the future. I am pretty open-minded and I have learned not to plan too far ahead.”

Meanwhile the announcement of Six nations referees shows four of England’s five matches will be refereed by Frenchmen. Jérôme Garcès, who was in charge last year when Wales won at Twickenham in the World Cup, will have the whistle in Cardiff and in Dublin on the final weekend. Romain Poite and Mathieu Raynal will control the games against Italy and Scotland respectively while the opening encounter against France will be refereed by an Australian, Angus Gardner.

Rassie have a plan for Rugby Championship